Book Talk: “...And Often the First Jew” with Rabbi Fuchs

Over the past five years Rabbi Stephen Fuchs of Bat Yam Temple of the Islands has spoken in more than two dozen German churches. In them he has been for many worshipers the first Jew they have ever seen. His aim in those sermons and lectures is to help Germans come to grips with the enormity of the Holocaust with an eye toward creating a better future.

Rabbi Fuchs’ father, Leo, was arrested in his native city of Leipzig on Kristallnacht, November 9, 1938. He was released from Dachau not long thereafter and came to the United States. Although his father never spoke of that horrible night, his experience has had a profound effect on Rabbi Fuchs’ life and career.

This program is open to the public. There is no registration required and no additional cost to participate.

Fuchs served as the Senior Rabbi of Congregation Beth Israel, a synagogue founded in 1843 with a current membership of nearly 900 families. Upon his retirement from the pulpit in 2011 he served as President of the World Union for Progressive Judaism. In that capacity he visited more than 65 communities on five continents advocating for Reform Jewish values and legitimacy.

Fuchs has published more than 100 (pre-internet) articles, book chapters and op-Ed essays in such publications as The Washington Post, The Jerusalem Post, The Baltimore Sun, and The Hartford Courant.

His first book, What's in It for Me? Finding Ourselves in Biblical Narratives, has been translated into German, Russian, and Spanish.

In the falls of 2014, 15 and 16, he and his wife Vickie spent ten weeks of speaking and teaching in synagogues, schools and churches (most of which have never seen a rabbi before) in Germany and at the Potsdam School of Theology, and the Abraham Geiger College. The Fuchs teach about the Holocaust and work to revitalize Jewish life throughout Europe.

He serves as Rabbi of Bat Yam Temple of the Islands in Sanibel, FL.

Fuchs graduated from Hamilton College and received his rabbinical education and ordination at Hebrew Union College-Jewish Institute of Religion. HUC-JIR awarded him an honorary DD in 1999.

Vanderbilt Divinity School, where he earned a D.Min. in Biblical Interpretation in 1992, named Fuchs its Distinguished Alumnus of the Year for 2017. 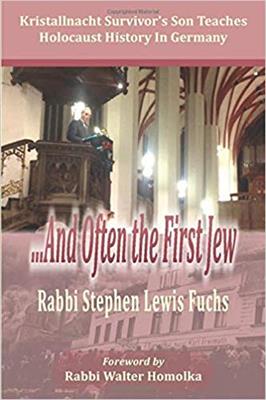